10 Pop Culture References The Golden Girls Can Teach You 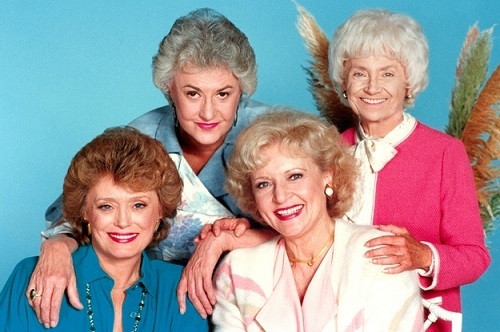 Why on God’s green earth would anyone today enjoy watching a 30-year-old sitcom about four older women’s lives in Miami? That’s a joke question, of course, because the answer is, “There are infinity reasons why anyone should love The Golden Girls.” One particularly good reason is the abundance of pop culture references peppered throughout the seven seasons that aired from 1985 to 1992.

The references to film, music, television, books, celebrities, and more offer learning opportunities for those who weren’t around then or are too young to remember anything besides Care Bears and slap bracelets. And for those who rocked it loud and proud during those two decades, here are some humorous flashbacks.

Before Snuggie and ShamWow, there was Amazing Discoveries.

In season seven, Blanche is imploring Dorothy to get up off the couch and join her at her favorite bar, The Rusty Anchor. But Dorothy is staring at the television, absorbed in Amazing Discoveries: “Look at that,” she says from the couch. “The thing just shucks the corn off the cob. It just shucks it off.”

Hosted by Mike Levey, Amazing Discoveries ran from 1989 to 1997 and is said to be the pioneer of “direct response television” (today’s Proactive, PedEgg and others). According to Direct Marketing News’ 2003 story on Levey’s death (he was only 55), the Amazing Discoveries host was once known as “the most watched man on television,” and throughout the nearly 100 episodes that aired, many fans tuned in just to see what style of sweater he’d have on.

Donald Trump has always kind of been disliked.*

The show makes many references to media mogul Merv Griffin, the force behind, among other things, Wheel of Fortune and Jeopardy!. In a season-seven dream, Dorothy is a contestant on Jeopardy!, and when Merv Griffin (who plays himself) emerges at the end of the dream, Dorothy says: “Mr. Griffin, please, you are the most beloved man in America. You are bright, you are charming, you are the anti-Trump.”

According to Forbes, in 1992, the year this season of The Golden Girls aired, Trump filed for corporate bankruptcy, the second in what would be four times between 1991 and 2009. In addition, 1992 was the year Trump and wife Ivana divorced after a 15-year marriage. Rough year, Donny. Griffin, on the other hand, was enjoying the success of the two game shows in addition to his own increasing wealth from hotel and gambling business ventures.

*This essay was written well before Donald Trump became president of the United States in 2016.

Oprah Winfrey has always had to deal with the haters.

In season four, Rose was convinced she witnessed a UFO when she was out on the lanai. Dorothy, the sensible one, refuses to believe it and tries to convince Rose that what she saw couldn’t have been a UFO.

“Well, it wasn’t a plane,” Rose says. “Planes aren’t that thin or that bright.” To which Dorothy responds, “Neither is Oprah Winfrey, but that doesn’t make her a flying saucer.”

Ouch. Season four of The Golden Girls aired in late 1988 through mid-1989, and The Oprah Winfrey Show made its debut in 1986, airing for 25 years. Oprah’s famous “wagon of fat” episode happened in 1988: for months she starved herself on a liquid diet, and after losing 67 pounds and fitting into size-10 Calvin Klein’s, she wheeled a red wagon piled high with fat onto the set to represent what she lost. According to a 2005 USA Today story, she said that’s the television stunt she regrets most.

You know actor Raul Julia’s face, but you probably don’t know his name.

In a season-seven episode, Stan and Dorothy are accused of being slum lords of an apartment building they co-own, and they are forced by a judge to spend the night in one of the bug-infested apartments as punishment. When Dorothy returns home the next morning, Sophia thinks she has escaped illegally and starts planning Dorothy’s future on the lam: she can obtain a fake birth certificate, go into hiding, and get plastic surgery. “By tomorrow morning, you can be Raul Julia,” Sophia says.

Julia was a Puerto Rican actor who had notable roles on screen and on stage, but for many, he’s probably most recognizable for his portrayal of Gomez in the 1991 film The Addams Family. This Golden Girls reference is from the 1992 season, and Julia passed away two years later at the age of 54.

Never forget that at one time, tanning beds were pretty widely accepted.

Dorothy’s daughter Kate gets married in season two, and she invites Stan, Dorothy’s ex-husband, to the ceremony. When Dorothy calls to invite Stan, he explains why his new wife, Chrissy, won’t be able to attend, to which Dorothy responds, “No, no I didn’t know that could happen from a tanning machine.”

Sometimes it’s hard to believe there was a time when tanning-bed use was generally accepted, but this episode aired in the show’s 1986 season, in what could be considered the heyday of the “tanning machine.” According to a Huffington Post article, tanning beds were becoming increasingly popular in the early 1980s, and by the 1990s, they were becoming even more popular with teens. It’s shameful to admit, but there’s a good chance many of us can remember hitting up the tanning salon before prom back in the day.

Don’t let whatever happened to Chrissy happen to you.

You know Chef Boyardee, but do you know Mama Celeste?

In season one, Sophia spends an episode striving to upstage and up-cook her arch rival, Mama Celeste, whom she was childhood friends with in Italy. After giving Blanche, Rose, and Dorothy a taste test of her own pizza versus “Mama You-Know-Who’s,” the girls don’t choose Sophia’s. “You can’t pick pizza, and you can’t pick men!” she exclaims.

Celeste brand frozen pizzas are still around today, but the brand started out as Mama Celeste. In 1970, the frozen pizzas were top sellers, but then distribution was restricted to regional markets, Florida being one of them. The pleasant-looking Mama Celeste – which is the actual face of founder Celeste Lizio – is still on the box, though Sophia wishes it was her face “in every freezer in America.”

Televised talent competitions did not begin with American Idol.

In season five, Blanche’s daughter decides to get artificially inseminated. As usual, the girls discuss this drama around the kitchen table. “You know, I’ve read that you can even buy the sperm of Nobel Prize winners,” Rose says. “Or is it Star Search winners?”

Star Search was an awesome show hosted by Ed McMahon that aired from 1983 to 1995. Performers competed in several categories, including singing, dancing, comedy, and spokes model. The show was the first of its kind at the time, and it gave a bazillion current pop culture figures their first exposure to the limelight, including (to name a few) Beyoncé, Britney Spears, Rosie O’Donnell, Drew Carey, Justin Timberlake, Alanis Morissette, and Usher – and they all lost!

“I think it’ll give you some idea of what freedom is all about,” Dorothy explains of Paine’s book. And of White’s book, Magda asks, “Why should I read this?”

“It’s just a hell of a book,” Dorothy responds.

And indeed, around two years before this Golden Girls episode aired, White authored an autobiography, in 1987, titled Vanna Speaks. The book came four years into her career role as wheel turner on The Wheel of Fortune, and, according to a 1987 Chicago Tribune story, the book was White’s response to her growing reputation as a “dumb blond,” “real-life Barbie doll,” and “Marshmallow Fluff.” You keep using your letters, Vanna.

It wasn’t always just Sonny and Cher. It used to be Cher and…. a lot of people.

In a late season five episode, Rose is having trouble choosing between Miles, her current boyfriend, and Buzz, a long-lost love from St. Olaf. At one point, Sophia walks in on Rose and Miles talking and exclaims, “Oh god, now she’s with the other one, it’s like living with Cher.”

Cher is pretty well known as the other half of “Sonny and Cher,” but that relationship (which only lasted for 10 years) is, well, not even the half of it. In 2012, the 67-year-old married her third husband, and in the 1980s, according to The Daily Mail, Cher had at least eight prominent relationships, which included famous musicians, actors, producers, a professional hockey player, and a bagel shop worker.

General Hospital was the reigning queen of daytime soap operas. And once upon a time, there were a bunch of them, so that meant something.

Sophia, in a season four episode, volunteers at a hospital. In typical Sophia fashion, she argues with one of her fellow volunteers, a man, loudly and in front of everyone. “What’s the matter, don’t you watch General Hospital? This place is a passion pit.”

In 1988, you were hard pressed to find someone who didn’t watch General Hospital. The show began in 1963, making it the longest-running daytime soap still currently in production. In 2012, it experienced a cancellation scare, but avoided it after the show’s plots, twists, turns, and characters were altered to appeal to a younger audience. Interestingly, according to a Los Angeles Times article, the show originally was the soap opera “that brought young people to daytime television” when it first aired more than 50 years ago. In November 1981, an on-screen wedding with characters Laura and Luke gained 30 million viewers, which is still a record for biggest daytime audience.

General Hospital is one of only four daytime soaps still on the air, and, as of 2013, it has remained the top daytime drama for 25 consecutive years.